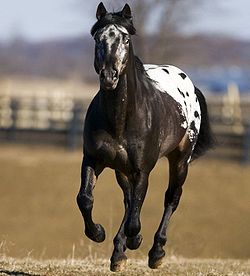 The Appaloosa is known for its preferred leopard-spotted coat pattern and other distinctive physical characteristics. Because the spotting pattern is a preferred identifying factor, and because several different horse breeds influenced the Appaloosa, today it maintains a wide range of body types, with weights ranging from 950 to 1,250 pounds (430 to 570 kg) and heights from 14 to 16 hands (56 to 64 inches, 142 to 163 cm). A similarly spotted breed in Europe, with a sport horse build, is the Knabstrup.

Most Appaloosas are recognized by their colorful spotted coat, striped hooves, mottled skin (most visible around their eyes and on their muzzle) and white sclera around the eye. Appaloosas can have brown, blue or hazel eyes, and an individual horse may have eyes of two different colors. While the original, "old time" Appaloosas often had a sparse mane and tail, it was not a predisposition for the breed as a whole; many original Appaloosas had full manes and tails. Today the "rat tail" trait is usually bred away from and most "modern" Appaloosas have full manes and tails.

The original "old time" or "old type" Appaloosa was a tall, narrow-bodied, rangy horse. This was a body style that reflected the mix of traditional Spanish horses already common to the plains of America with the addition of 18th century European bloodlines, particularly those of the "pied" horses popular in that period that were shipped en masse to the Americas once the color had fallen from fashion in Europe. These horses were similar to a tall, slim Thoroughbred-Andalusian type of horse popular in 18th-century Bourbon-era Spain. The original Appaloosa also tended to have a convex profile, similar to that of the warmblood-Jennet crosses developed during the reign of Charles V. The type was modified by the addition of draft horse blood following the defeat of the Nez Perce, when U.S. Government policy pushed the Indians to become farmers and provided draft horse mares to breed to existing stallions.

After the formation of the breed registry in 1938 a more modern type developed with the addition of American Quarter Horse and Arabian bloodlines. Quarter Horse mares crossed on Appaloosa stallions produced horses suitable for sprint racing and halter competition. Many cutting and reining horses resulted from old type Appaloosas crossed on Arabian bloodlines, particularly via the Appaloosa foundation stallion Red Eagle In the 1970s, a modern infusion of Thoroughbred blood was added to the breed to produce horses more suited for racing.