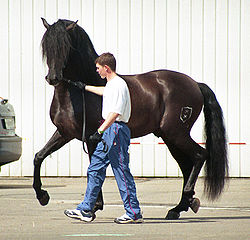 Generally standing between 15.2 and 16.2 hands (62 to 66 inches, 157 to 168 cm) high, Andalusian horses are both elegant and strongly built. Members of the breed have heads of medium length, with a straight or slightly convex profile.  Ultra convex and concave profiles are discouraged in the breed, and are penalized in breed shows. Necks are long and broad, running to well-defined withers; chests massive; backs short; hindquarters broad and strong, with well-rounded croups. The breed tends to have clean legs, with no propensity for blemishes or injuries, and energetic gaits. The mane and tail are thick and long, although the legs do not have excess feathering. Andalusians tend to be docile, but also intelligent and sensitive. When treated with respect they are quick to learn, responsive and cooperative.

There are two additional characteristics unique to the Carthusian strain, believed to trace to the strain's foundation stallion Esclavo. The first is warts under the tail, a trait which Esclavo passed to his offspring, and a trait which some breeders felt was necessary to prove that a horse was a member of the Esclavo bloodline. The second characteristic is the occasional presence of "horns", which are actually frontal bosses, possibly inherited from Asian ancestors. The physical descriptions of the bosses vary, ranging from calcium-like deposits at the temple to small horn-like protrubences near or behind the ear. However, these "horns" are not considered proof of Esclavo descent, unlike the tail warts.

When the breed was first developed, most coat colors were found, including spotted patterns. Today, around 80 percent of all Andalusians are gray. Of the remaining horses, approximately 15 percent are bay and 5 percent are black, dun or palomino or chestnut. Other colors, such as buckskin, pearl, and cremello, are rare, but are recognized as allowed colors by the International Andalusian and Lusitano Horse Association. In the early history of the breed, certain white markings and whorls were considered to be indicators of character and good or bad luck. Horses with white socks on their feet were considered to have good or bad luck, depending on the leg or legs affected. A horse with no white markings at all was considered to be ill-tempered and vice-ridden, while certain facial markings were considered representative of honesty, loyalty and endurance. Similarly, hair whorls in various places were considered to show good or bad luck, with the most unlucky being in places where the horse itself could not see them – for example the temples, cheek, shoulder or heart. Two whorls near the root of the tail were considered a sign of courage and good luck.

The movement of Andalusian horses is extended, elevated, cadenced and harmonious, with a balance of roundness and forward movement. Poor elevation, irregular tempo, and excessive winging (sideways movement of the legs from the knee down) are discouraged by breed registry standards. Andalusians are known for their agility and their ability to learn difficult moves quickly, such as advanced collection and turns on the haunches. A 2001 study compared the kinematic characteristics of Andalusian, Arabian and Anglo-Arabian horses while moving at the trot. Andalusians were found to overtrack less (the degree to which the hind foot lands ahead of the front hoof print) but also exhibit greater flexing of both fore and hind joints, movement consistent with the more elevated way of going typically found in this breed. The authors of the study theorized that these characteristics of the breed's trot may contribute to their success as a riding and dressage horse.

A 2008 study found that Andalusians experience ischaemic (reduced blood flow) diseases of the small intestine at a rate significantly higher than other breeds, and stallions had higher numbers of inguinal hernias, with risk for occurrence 30 times greater than other breeds. At the same time, they also showed a lower incidence of large intestinal obstruction. In the course of the study, Andalusians also showed the highest risk of laminitis as a medical complication related to the intestinal issues.