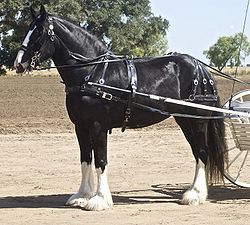 The Shire has an enormous capacity for weight pulling. In 1924, at a British exhibition, a pair of horses was estimated to have pulled a starting load equal to 45 tons, although an exact number could not be determined as their pull exceeded the maximum reading on the dynamometer. Working in slippery footing, the same pair of horses pulled 16.5 tons at a later exhibition.

The largest horse in recorded history was probably a Shire named Mammoth, who was born in 1848. He stood 21.2ÂÂ hands (86ÂÂ inches, 218ÂÂ cm) high, and his peak weight was estimated at 1,500ÂÂ kilograms (3,300 lb). At over 19ÂÂ hands (76ÂÂ inches, 193ÂÂ cm), a Shire gelding named Goliath was the Guinness Book of World Records record holder for the world's tallest horse until his death in 2001.