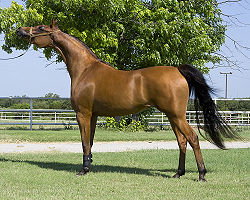 Arabian horses have refined, wedge-shaped heads, a broad forehead, large eyes, large nostrils, and small muzzles. Most display a distinctive concave or "dished" profile. Many Arabians also have a slight forehead bulge between their eyes, called the "jibbah" by the Bedouin, that adds additional sinus capacity, believed to have helped the Arabian horse in its native dry desert climate. Another breed characteristic is an arched neck with a large, well-set windpipe set on a refined, clean throatlatch. This structure of the poll and throatlatch was called the mitbah or mitbeh by the Bedouin, and in the best Arabians is long, allowing flexibility in the bridle and room for the windpipe.

Other distinctive features are a relatively long, level croup, or top of the hindquarters, and naturally high tail carriage. Well-bred Arabians have a deep, well-angled hip and well laid-back shoulder. Most have a compact body with a short back. Some, though not all, have 5 lumbar vertebrae instead of the usual 6, and 17 rather than 18 pairs of ribs. Thus, even a small Arabian can carry a heavy rider with ease. Arabians usually have dense, strong bone, sound feet, and good hoof walls. The USEF breed standard requires Arabians have solid bone and correct conformation, They are especially noted for endurance, and the superiority of the breed in Endurance riding competition demonstrates that well-bred Arabians are strong, sound horses with good bone and superior stamina. At international levels of FEI-sponsored endurance events, Arabians and half-Arabians are the dominant performers in distance competition worldwide.

A misconception confuses the skeletal structure of the sacrum with the angle of the "hip" (the pelvis or ilium), leading some to assert that the comparatively horizontal croup and high-carried tail of Arabians correlates to a flat pelvis and thus they cannot use their hindquarters properly. However, the croup is formed by the sacral vertebrae. The hip angle is determined by the attachment of the ilium to the spine, the structure and length of the femur, and other aspects of hindquarter anatomy, not necessarily the structure of the sacrum. Thus, the Arabian has conformation typical of other horse breeds built for speed and distance, such as the Thoroughbred, which properly includes the angle of the ilium being more oblique than that of the croup, the hip at approximately 35 degrees to a croup angle of 25 degrees. The proper comparison of sacrum and hip is in length, not angle. All horses bred to gallop need a good length of croup and good length of hip for proper attachment of muscles, and the two do go together as a rule. The hip angle, on the other hand, is not necessarily correlated to the line of the croup. Thus, a good-quality Arabian has both a relatively horizontal croup and a properly angled pelvis with good length of croup and depth of hip (length of pelvis) to allow agility and impulsion. Within the breed, there are variations. Some individuals have wider, more powerfully muscled hindquarters suitable for intense bursts of activity in events such as reining, while others have longer, leaner muscling better suited for long stretches of flat work such as endurance riding or horse racing.