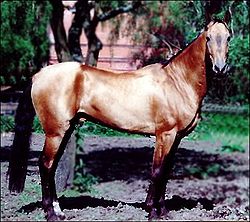 The Akhal-Teke typically stands between 14.2 and 16 hands. These horses are famous for those individuals who have a golden buckskin or palomino color with a distinct metallic sheen. However, a number of other colors are recognized, including bay, black, chestnut, palomino, cremello, perlino and grey. The Akhal-Teke's most notable and defining characteristic is the natural metallic bloom of its coat. This is especially seen in the palominos and buckskins, as well as the lighter bays, although some horses "shimmer" more than others. The color pattern is thought to have been used as camouflage in the desert. The cream gene that produces buckskin and palomino is a dilution gene that also produces the occasional cremello and perlino. Akhal-Tekes are not thought to carry the dun gene or roan gene.

The Akhal-Teke has a fine head with a straight or slightly convex profile, and long ears. It also has almond-shaped eyes. The mane and tail are usually sparse. The long back is lightly muscled, and is coupled to a flat croup and long, upright neck. The Akhal-Teke possess sloping shoulders and thin skin. These horses have strong, tough, but fine limbs. They have a rather slim body and ribcage (like an equine version of the greyhound), with a deep chest. The conformation is typical of horses bred for endurance over distance. The Akhal-Tekes are lively and alert, with a reputation for bonding to only one person.

The breed is tough and resilient, having adapted to the harshness of Turkmenistan lands, where horses must live without much food or water. This has also made the horses good for sport. The breed has great endurance, as shown in 1935 when a group of Turkmen riders rode the 2500 miles from Ashgabat toMoscow in 84 days, including a three-day crossing of 235 miles of desert without water. The Akhal-Teke is also known for its form and grace as a show jumper.