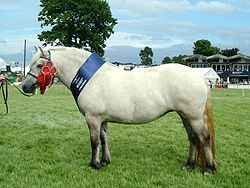 The Highland Pony is one of the three native breeds of the Scottish Highlands and Islands, the others are the Shetland pony and the Eriskay pony. Over many centuries the breed has adapted to the variable and often severe climatic and environmental conditions of Scotland. The winter coat consists of a layer of strong badger-like hair over a soft dense undercoat, which enables this breed of pony to live out in all types of weather. This coat is shed in the spring to reveal a smooth summer coat. This essential hardiness is combined with a kindly nature and even temperament.

The height of a Highland pony is between 13 hands to 14.2 hands. The head is well-carried and alert with a kindly eye, broad muzzle and deep jowl. Reasonable length of neck going from the withers with a good sloping shoulder and well-placed forearm is desired. Ponies are to have a well-balanced and compact body with deep chest, well-sprung ribs, powerful quarters with a well-developed thigh, strong gaskin and clean flat hocks. Desired traits also include: flat hard bone, broad knees, short cannon bones, oblique pasterns and well-shaped broad dark hooves.

Feather hair behind the fetlocks is soft and silky. When Highland ponies are shown, the mane and tail is kept natural, flowing and untrimmed.

Highland ponies are seen in a range of dun shades. The Highland Pony Society recognizes shade variations referred to as "mouse," (known in other breeds as grullo) "yellow," (bay dun) "grey," (dun with gray gene that lightens with age) and "cream" ( a dun apparently also possessing a dilution factor). Other, nonstandard, terms such as "fox dun", (describing a red dun) "oatmeal dun" and "biscuit dun" are sometimes also used. They also may be grey, seal brown, black, and occasionally bay or a shade of liver chestnut with a flaxen mane and tail.

Dun-colored ponies have primitive markings which include a dorsal stripe and some show zebra markings on legs. A transverse shoulder stripe is also often present. Foal coat often changes and many ponies change colour gradually as they grow older. Others show a slight seasonal change in colour between winter and summer coats. "Broken" colours such as pinto are not allowed.