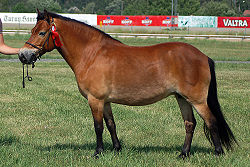 The Gotland Russ is the most common breed of pony in Sweden. It is a good all round pony and is often used by riding schools. Modern Gotlands are most popular as a riding ponies, often for children, and as harness racing ponies. They also excel at show jumping, dressage, and eventing.

The pony is strong and hardy, and can be ridden by children and small adults.

The coat of the Gotland pony can be a variety of colors, although bay or black is usually preferred. Wild bay and mealy (Pangare) are very common in the breed. Common colors include bay, chestnut, black, buckskin, and palomino, but all colors except for dun, grey, and dorsal pinto, are allowed.

The Gotland is considered to be a very quick learner, and described as easy to train.